Gross Domestic Product (GDP) is the sum of Consumption (C), Government Spending (G), Savings (S) and the difference of Exports and Imports (X – M). Mathematically, GDP = C + G + S + X – M. Different countries exhibit different characteristics in GDP and GDP growth. For example, in the United States, the GDP is primarily fueled by consumption. Consumption accounts for about 70% of the total GDP in the United States. On the other hand, in China, savings and exports contribute a significant portion of the country’s GDP. In India, GDP is primarily driven by consumption as seen in Chart A below. 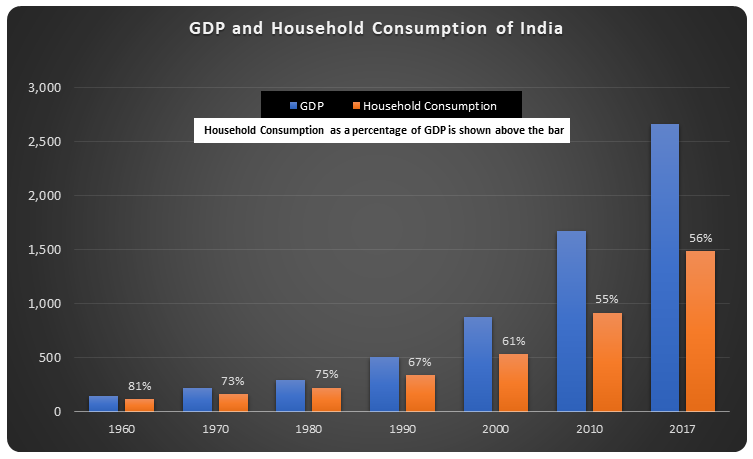 Charts A: GDP and Household Consumption in India (1960 – 2017) Source: World Bank
In 2017, India’s GDP was US $2.66 trillion of which US $1.488 trillion came from household consumption – a contribution of 56%. One could argue from the chart above that over the years, the contribution of consumption to GDP has gone down significantly and the argument is true. In 1990, household consumption accounted for 67% of India’s GDP whereas in 2017, the contribution was 56%, a drop of 11% in 27 years. However, one has to understand that from 1990 to 2017, India’s GDP has increased from US $507 billion to US $2.66 trillion which is more than a 5-fold increase. Consequently, household consumption has also grown significantly from US $38 billion to US $1.488 trillion – a 4.4 times increase which is not insignificant by any means. (Note: All GDP and related figures are in constant 2010 US $ terms to eliminate any effects of foreign exchange translation). 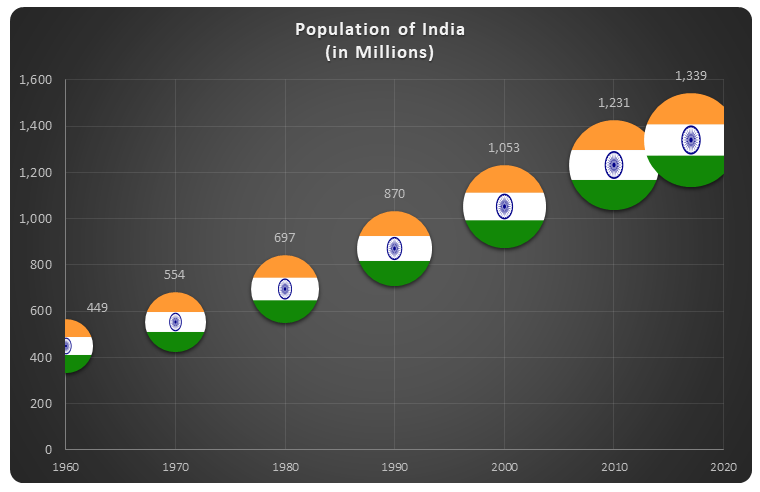 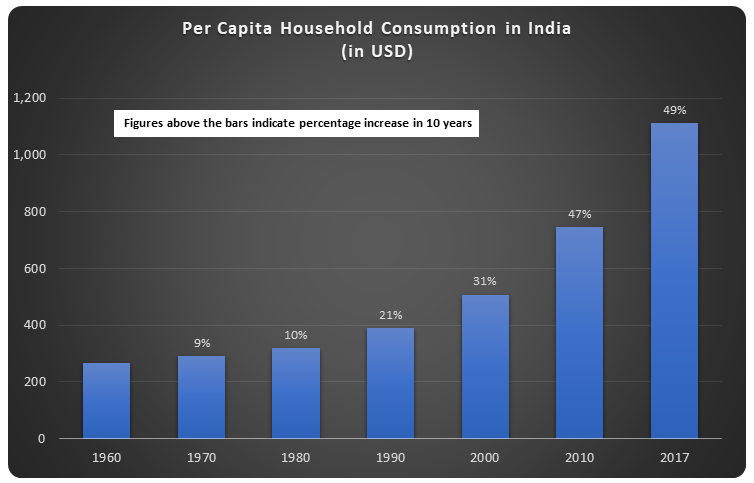 Chart C: Per Capita Household Consumption in India (1960 – 2017) Source: World Bank
Based on the analysis thus far, one can safely arrive at two important conclusions:
The question then is how has the stock market in India reacted to increasing household consumption. After all, the financial markets are efficient and prices reflect all available information. Therefore, our hypothesis is that the companies in India that cater to household consumer demand should have done well.
In order to validate this hypothesis, we need to classify publicly traded companies. For this purpose, we used the FactSet Revere Business Classification System (RBICS). RBICS is a multi-level industry classification system and we have used the topmost level called ‘RBICS Economy’ for this exercise. Each of the RBICS Economies has been classified into one of the three Economic Sectors – Consumer, Infrastructure and Technology (see Table I below). 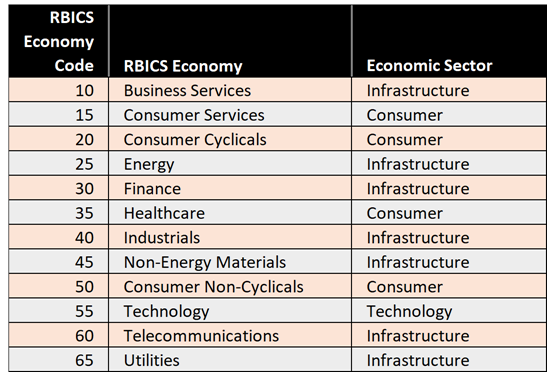 Table I: RBICS Economy and classification into Consumer, Infrastructure or Technology

Based on this classification, we then created two stock market indices of publicly traded companies in India – India Consumer Index and India Infrastructure Index. For each of these indexes, we consider companies whose RBICS Economy Code fall in the corresponding economic sectors as outlined in Table I. After all, the best way to assess the performance of a stock market or a segment of the stock market is to create an index and track the performance of the index over time. In financial engineering, this process is called ‘Back-testing’.

The specifications for these indices are as follows:

Free-float Market Capitalization = Free-float Factor * Market Capitalization. Free-float Factor represents the proportion of shares that are tradeable and are not held by entities like government, promoters, holding company, joint venture, sovereign wealth fund, etc. The rationale is that these owners buy and hold the shares for long periods and these shares are not available for trading in the stock markets.

The performance of the India Consumer Index is very impressive. The index was back-tested from Jan 1st, 2008 to Dec 31st, 2018 – a span of 11 years. The year 2008 was deliberately selected as the starting point to capture the global economic downturn precipitated by the banking crisis worldwide. Over these 11 years, the cumulative returns of the India Consumer Index is 270% as compared to 77% for Nifty-50 and 78% for BSE Sensex (see Chart D and Tables II & III below). 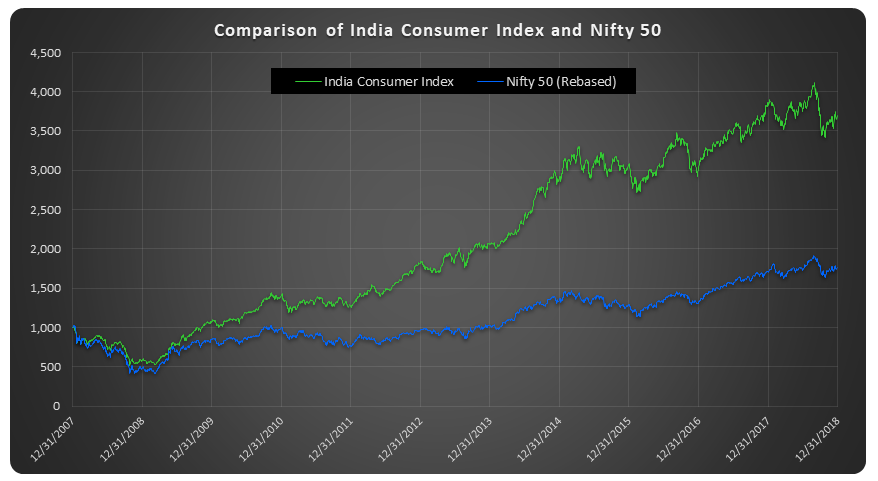 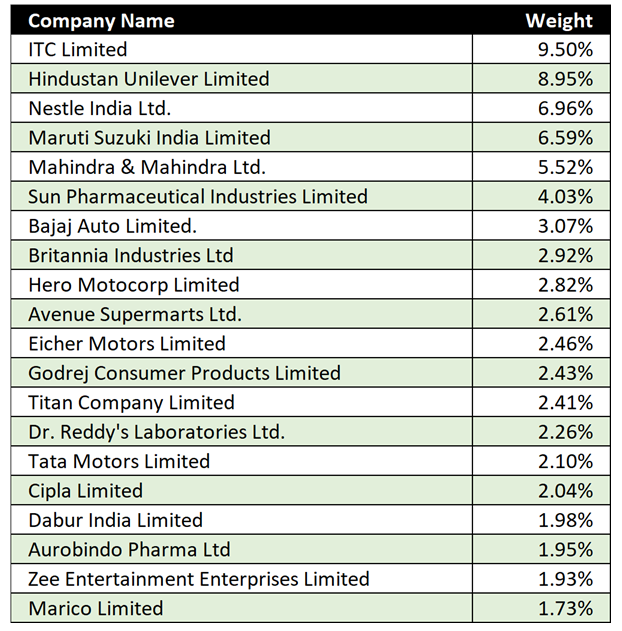 Table III: Top 20 constituents of India Consumer Index
By comparison, the India Infrastructure Index underperforms significantly. Over the same period Jan 1st, 2008 to Dec 31st, 2018, the cumulative returns are 26% and in addition, the volatility is higher than Nifty-50 and BSE Sensex by about 3% (See Chart E and Tables IV & V below). 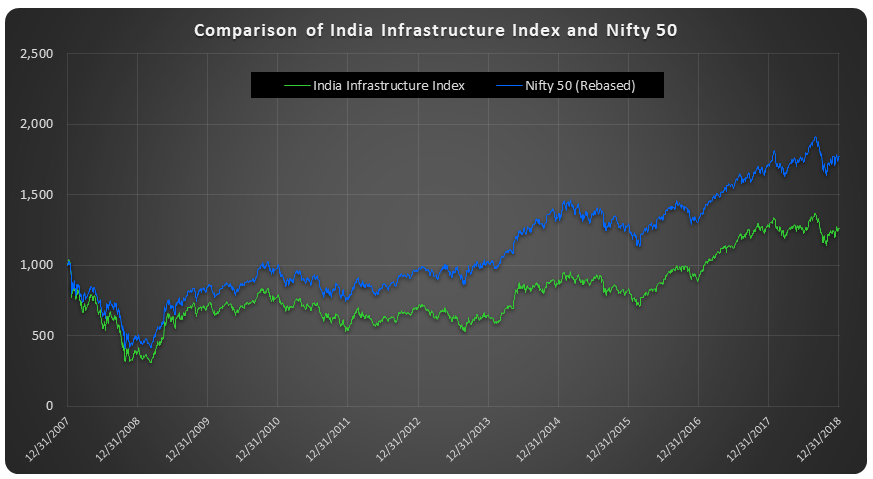 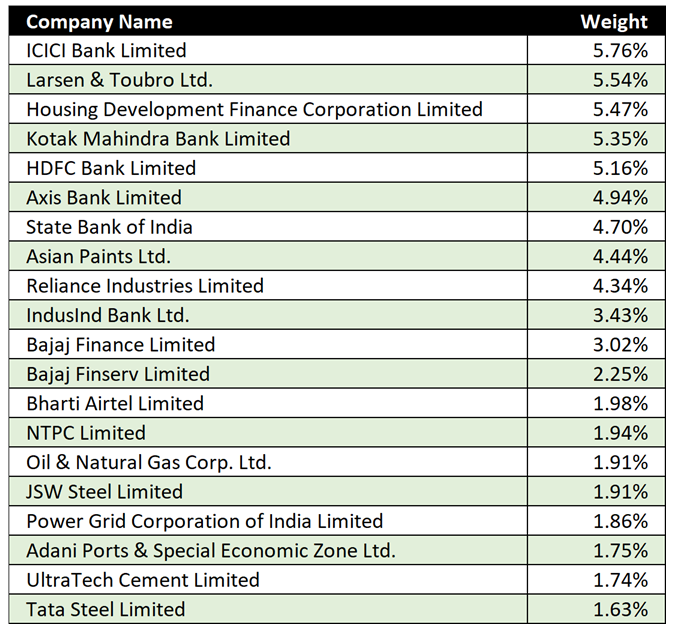 Table V: Top 20 constituents of India Infrastructure Index
Conclusions:
Disclaimer:This analysis is neither an endorsement nor a criticism of the economic and monetary policies of the Government of India or the policies followed by the governments in power since 1990. This study is a purely an attempt to understand some of the drivers of the equity markets in India.