The finals for the T20 world cup will be played at the famous Eden Gardens today and a new champion will be crowned. England are playing West Indies in the finals and, whoever wins will be the champion for a second time. England has won the T20 World Cup in 2010 and West Indies won it in 2012. When the tournament started, not many would have imagined that these two squads will be in the finals. One has to however give these two teams some credit for the resilience they have shown in this tournament in the face of adversity.
England lost the first match against the West Indies and were faced with a mammoth total from South Africa in the second match. Nonetheless, they never balked under pressure, maintained their pace of scoring and eventually beat South Africa with 2 balls to spare. In their third game against Afghanistan, England lost early wickets and were 85 for 7 in the 14th over. But some determined middle order batting put up a competitive total that was enough to beat Afghanistan. Again in the semi-finals against New Zealand, the Kiwis were scoring at a brisk rate and were 89 for 1 after 10 overs. At that stage, England put the brakes on New Zealand, restricted them to 153 and eventually won the match easily with 17 balls to spare.
With West Indies, the story is similar. They also showed some resilience in the face of stiff challenges. It is true that Chris Gayle did some brisk hitting against England in the first match, but in T20 a target of 182 is not easy to chase. Against South Africa, the West Indian bottom order held their nerves even though wickets were tumbling and won by 3 wickets with 2 balls to spare. They needed 20 runs in the last two overs which they managed to score even though a wicket fell in the 19th over. Against India, few would have given West Indies much chance of winning when the Indians scored 192 and Chris Gayle was out for 5 in the second over. Again, some determined batting from Johnson Charles, Lendl Simmons and Andre Russell saw them home. One could always argue that Lendl Simmons benefitted from the two no balls in which he was caught. Nonetheless, people also forget that very early in his innings Virat Kohli survived two run outs in the same ball by the skin of his teeth. On any other day, Dwayne Bravo will not miss those run out opportunities. Such close calls always happen in sports and one has to accept them and move on.
In my previous blog, I had mentioned two facts – in the first semi-final both the teams are evenly poised and in the second semi-final, India has the advantage. Well, some would say that the first semi-final between New Zealand and England was not so close after all. I beg to disagree. In my mind, a competitive game does not mean that it has to be decided in the last 1 or 2 balls. The way the momentum swung in that semi-final and, the way in which England reined in New Zealand is nothing short of a competitive contest. In the second semi-final, Indian batsmen batted well and showed their depth. I had suggested in my blog that the performance of the Indian batsmen in this tournament has been below their long-run average and thus one could expect better performance in the semi-finals because performance does revert to the mean. Well, the Indian batsmen did play better in the semi-finals but, it was not their day. West Indies showed some grit and took the game away.
So what’s in store for the finals? A comparative analysis of batting and bowling shows that England’s batting has improved phenomenally (see Chart A). The batting average of West Indies has also improved but not as much as England. In bowling, the economy rate of West Indies has improved marginally. That’s a result of some tight bowling by the likes of Samuel Badree and Suleiman Benn. Currently, England has some strong momentum in batting and that can be a concern for West Indies. 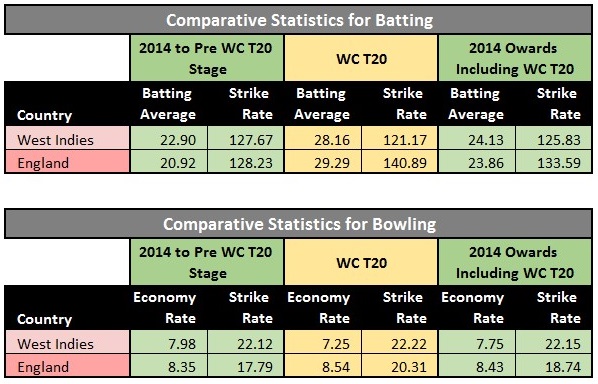 Chart A: Comparative Statistics on Batting & Bowling
In my analysis, both the teams are evenly poised in batting and bowling (see Chart B). England does have a slight advantage in batting strike rate but, if Chris Gayle gets going, he can easily nullify such advantage. On the other hand, West Indies has the advantage in bowling economy but England has a better bowling strike rate. Additionally, I would state that the West Indian batsmen have scored evenly on both sides of the wicket whereas, England has relied slightly more on scoring through the on side. This could be a cursor for field placement for the West Indian bowlers. 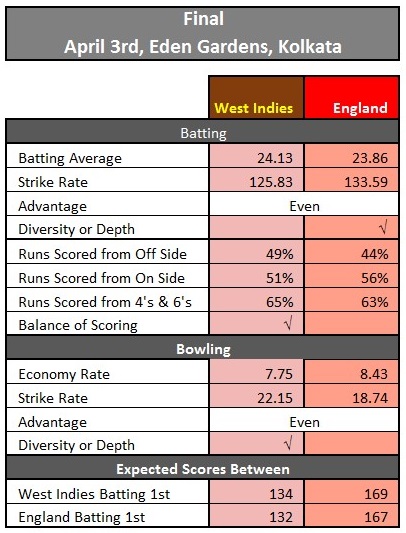 Chart B: Comparative Advantage in Batting & Bowling
Finally, a few pointers for the final:
Overall, it has been an interesting tournament and the final is just too close to call.